I recently started hacking my Raspberry Pi, and as someone who feels most at home in software, I was delighted to find myself controlling hardware components over an SSH connection and having the entirety of the web at my disposal.

I decided to build a simple project that would use a Grove Ultrasound sensor I had bought. I decided on controlling the brightness of an LED by moving my hand up and down above the ultrasound sensor. To do this, I started with the Grove Ultrasound Sensor python code off Github as well as a software PWM (pulse width modulation) library for Raspberry Pi GPIO pins by Mark Williams. 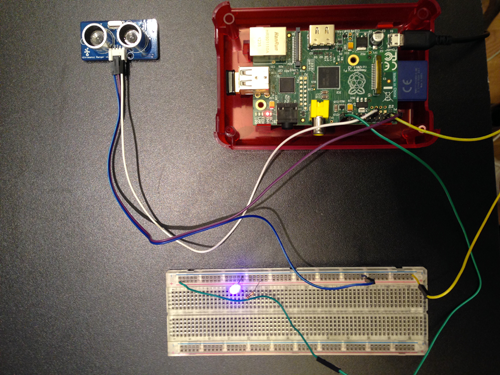 For this project you will need:

Hook up the Grove Ultrasound sensor connectors with the following labels:

Now we need to install Mark Williams PWM software on our Raspberry Pi.

Once we've done this, we need to enable PWM on GPIO pin 7 in order to control the LED brightness. We do this by specifying pin 7 as an argument in the following call:

As Mark explains, this starts the pi blaster as a background job. If you ever want to stop it from running, you run the following:

Now we need to grab the code I wrote based on the Grove Ultrasound Sensor python script. I've modified the script to adjust the LED brightness based on the distance measured by the sensor. The closer ones hand is, the dimmer the LED becomes. In order to control the brightness of the LED, we need to write to /dev/pi-blaster specifying the pin and the brightness between 0 (off) and 1 (full brightness).

Given that the pi-blaster was setup in the previous step, this should begin the measurements by the ultrasound sensor. Move your hand up and down above the sensor and watch the LED brightness adjust!

I hope you enjoyed this walk through!